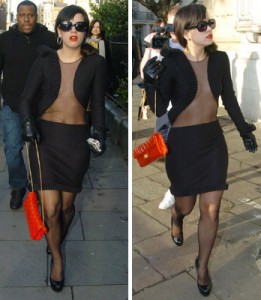 Right after Lily Allen revealed she had been impregnated by Sam Cooper, we have found out that she is also preparing to debut her new fashion store Lucy In Disguise with sister Sarah Owen very soon. The preview will be at Vintage at Goodwood next weekend in a pop-up shop that will sit alongside other retro shopping stalls.

The boutique will open this September near Oxford Street and will showcase Lily’s own wardrobe favourites to rent or buy. Word is there will be everything from tour costumes to flea market finds.

The idea for the store sprung from Lily’s attempts to curb her clothes hoarding, and the fact that she was forever lending them out to friends and family. Lily has also revealed she has an ethical vision for the store, as she feels that second-hand shopping offers ‘an antidote to the mass consumerism culture of high street shopping.’ It probably won’t be as cheap as your local charity shop, but the fact that you can rent a dress of Lily Allen’s is quite something.