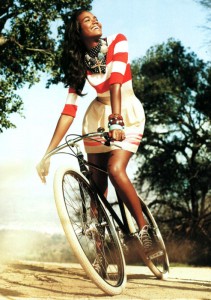 It is Earth’s 4.54 billionth birthday, roughly, and ignorance still abounds. The latest example is in an article titled “Why Are Black Women Rated Less Physically Attractive Than Other Women, But Black Men Are Rated Better Looking Than Other Men?“. The ‘writer’ is Satoshi Kanazawa, an evolutionary psychologist at the London School of Economics who apparently spends his time trying to find scientific evidence to assuage his prejudice. The article was posted on Sunday at Psychology Today and taken down by Monday morning, though screenshots are available at the Buzzfeed link above.

Now to the quote-unquote…science. His conclusions were found by conducting three interviews over seven years, and asking those interviewees to rate the hotness of a group of people. He then used the results to produce a factor-analyzed conclusion, a statistical tool that is used to get rid of variable errors in studies focused on quantities that are measurable (ie. votes cast, steps walked, etc.)…not skin colour. Oh, but if you don’t believe those findings, rest assured that black women also have tons of testosterone flailing around.

He concludes that there are “marked race differences in physical attractiveness among women, but not among men”. According to Kanazawa, black women have a higher average body mass index than women who have less pigment to their skin, and “Africans have more mutations in their genomes than other races” and those mutation loads “significantly decrease physical attractiveness”. Pass me a wet fish.

This is no scientific result to back his personal, delusional preference. This is a disgusting argument to make, and racism at it’s most contrived.