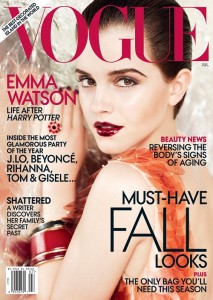 As part promotion of the final cinematic chapter of Harry Potter – Harry Potter and the Deathly Hallows Part 2 – there is quite a bit of Emma Watson in US Vogue‘s July 2011 issue (shot by Mario Testino). Her cover and spread are filled with the best of Fall/Winter 2011; Prada to Tom Ford, Aquilano.Rimondi, Calvin Klein, Dolce & Gabbana, and many more.

The “Emma Watson’s New Day” photos are so breathtaking that I barely noticed the male models – Jeremy Irvine, Luke Treadaway, and Tom Hughes – were there.

See the rest of the spread and part of her interview below!

Playing in the Harry Potter make-up trailer:
“That was my playground. I would sit and play with lipsticks, foundations, and eye shadows; and every now and then [head of makeup, Amanda Knight] would let me do the extras’ face paint for the Quidditch matches.”

On figuring out the balance between education and work:
“I have felt for the last ten years I have had this battle; I’ve been fighting so hard to have an education. It’s been this uphill struggle. I was Warner Bros.’ pain in the butt. I was their scheduling conflict. I was the one who made life difficult. I just realized at one point that I can’t fight everything. I have to move in the direction of it—and go with it.”