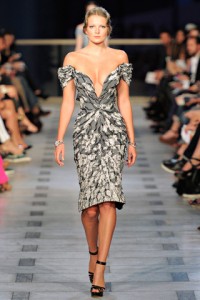 On top of the voluptuous drama, the accessories were also a treat. Charlotte Olympia provided the complimentary footwear (in black, gold, nude and silver with a silver heel), Elizabeth Cole jewellery provided the ‘cherries on top’, Judith Leiber provided clutches, and sunglasses were provided by Illesteva. I wish runways would install shopping cart software.