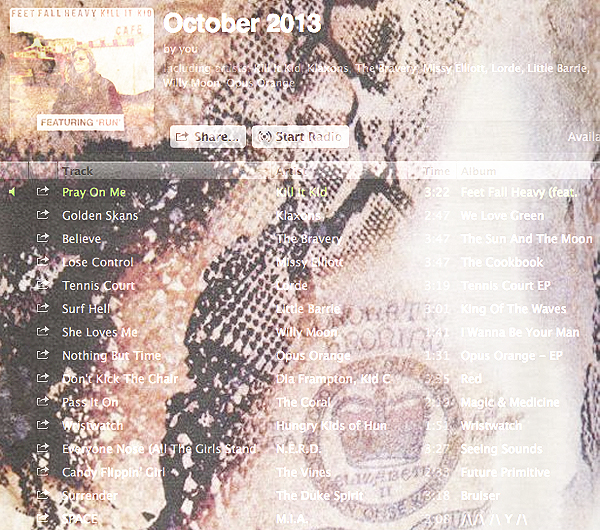 This month, I seem to spending all of my time singing acoustic versions of dirty rap songs. In my head, of course. It took some full-force willpower to not create an Ultimate Dirty Rap Song Playlist, but I managed to restrain myself. A bit. Welcome to October’s free Spotify playlist!

(Need to catch up on last month’s? Click here for September’s LFW playlist.)

Track listing:
Pray On Me by Kill It Kid
Golden Skans by Klaxons
Believe by The Bravery
Lose Control by Missy Elliott
Tennis Court by Lorde
Surf Hell by Little Barrie
She Loves Me by Willy Moon
Nothing But Time by Opus Orange
Don’t Kick The Chair by Dia Frampton and Kid Cudi
Pass It On by The Coral
Wristwatch by Hungry Kids of Hungary
Everyone Nose by N.E.R.D.
Candy Flippin’ Girl by The Vines
Surrender by The Duke Spirit
SPACE by M.I.A. 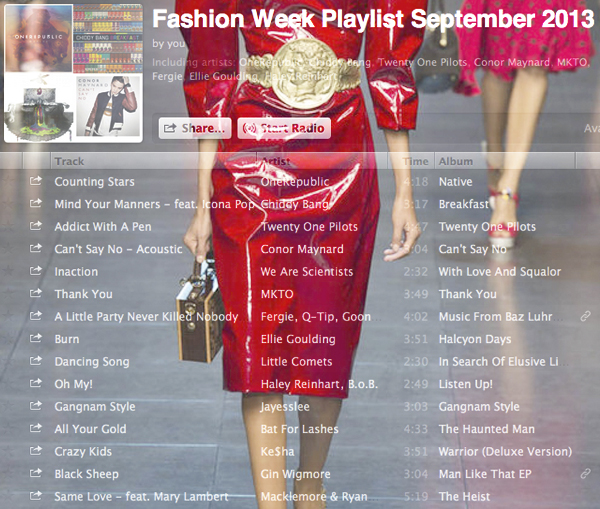 Today we welcome the final ‘Week’ of Fashion Month – Paris Fashion Week – and, with it, this month’s super spectacular free Spotify playlist. Time to throw on the most ridiculous, seasonally-inappropriate clothes in your wardrobe and strut around your room like a supermodel.

If you can’t control the rhythm after fifteen choons, there’s always August’s Spotify playlist to jam to, as well.

Track listing:
Counting Stars by OneRepublic
Mind Your Manners by Chiddy Bang ft. Icona Pop
Addict With A Pen by Twenty One Pilots
Can’t Say No – Acoustic by Conor Maynard
Inaction by We Are Scientists
Thank You by MKTO
A Little Party Never Killed Nobody by Fergie
Burn by Ellie Goulding
Dancing Song by Little Comets
Oh My! by Haley Reinhart
Gangnam Style by Jayesslee
All Your Gold by Bat For Lashes
Crazy Kids by Ke$ha
Black Sheep by Gin Wigmore
Ame Love by Macklemore & Ryan Lewis ft. Mary Lambert 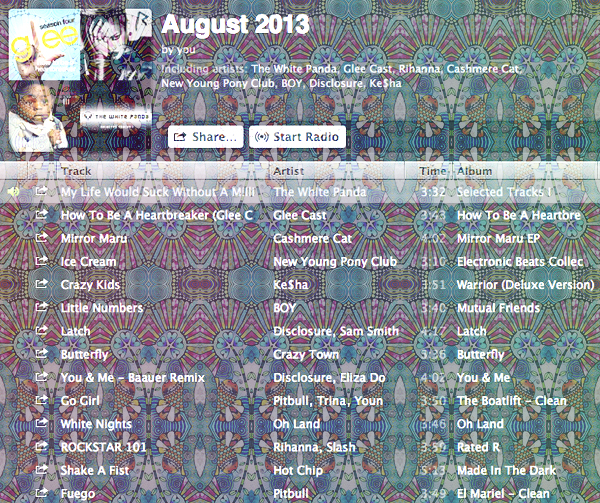 This month’s funky fresh free Spotify playlist is, thankfully, not as awful as the sentence’s alliteration. In fact, I think it is kind of badass (bias, I know). Tying it in with the Ultimate Summer Driving Playlist competition, I have included a mix of covers, mash-ups, cruise music, and songs that will guarantee a booty shake or two.

…if it wasn’t already stuffed in July’s Spotify playlist, I guarantee you Blurred Lines would be the first track this month. How it is possible to not be sick of that song yet?

Track list:
My Life Would Suck Without A Milli by The White Panda
How To Be A Heartbreaker by The Glee Cast
Mirror Maru by Cashmere Cat
Ice Cream by New Young Pony Club
Crazy Kids by Ke$ha
Little Numbers by BOY
Latch by Disclosure and Sam Smith
Butterfly by Crazy Town
You & Me – Baauer Remix by Disclosure and Eliza Doolittle
Go Girl by Pitbull and Trina
White Nights by Oh Land
Rockstar 101 Rihanna and Slash
Shake a Fist by Hot Chip
Fuego by Pitbull 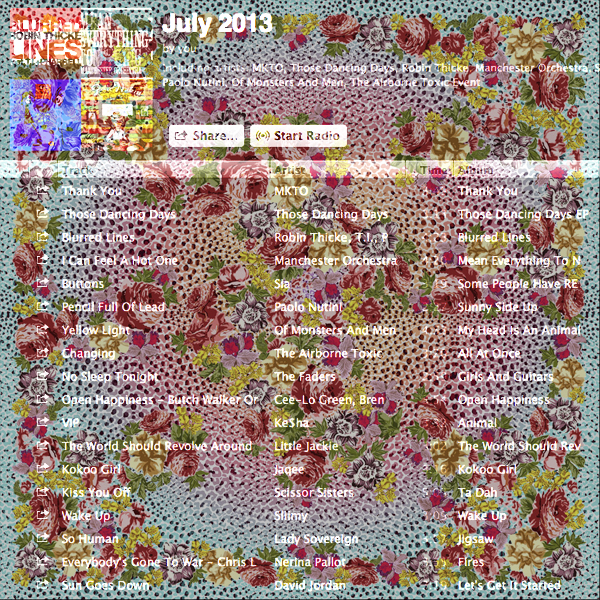 I think most people discover new bands during the Summer. Whether it’s the increase in parties, the eager hunt for road trip playlists or simply the increase in an amount of free time for many of us to actually enjoy music, I always end up spending a chunk of Summer downtime creating free playlists for friends.

June’s Spotify playlist had its fair share of summer jams, but July’s playlist is a whole new scene. The list includes Lady Sovereign and Nerina Pallot to Cee-Lo Green and Of Monsters and Men (not leaving out The Ultimate Song of The Summer; Blurred Lines).

A few weeks ago my lovely and Northern-born Manfriend decided, spontaneously, to ‘educate me about The North’ by taking me to see Billy Elliot The Musical. Having casually remembered the story behind the film (boy does ballet) from nearly 13 years prior, I decided to go into the musical without doing any further research or forming any expectations.

Then I fell in love.

When Superbreak asked me to review the musical (and the new cast) on their behalf last week, I couldn’t say no. You see, what I didn’t realise when sliding into my seat in the weeks prior was that Billy Elliot’s West End musical has – over eight years – become one of the most celebrated, award-winning musicals on stage today.

The story, now seen by over 8 million people worldwide, is set against the backdrop of the 1984/85 miners’ strike and follows a young boy’s journey from boxing class failure to ‘ballet boy’. Though the story doesn’t feel particularly musical-friendly, the execution – from the lighting to the humour to the exceptionally talented dancers – is flawless.

From an ex-dancer’s viewpoint, Anna-Jane Casey completely stole the show for me as Mrs Wilkinson; Billy Elliot’s dance teacher. Playing a character that begs to be the soul of a show, Anna-Jane was able to do so with technical precision and a live warmth and believability that could not have been surpassed. This cast is the cream of the crop.