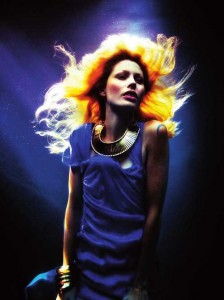 Though you may know Kirsty Hume for her long, healthy blonde locks, for the latest Agent Provocateur campaign she has bright orange hair a la her 2008 shoot with V Magazine seen above.

Two years later, Kirsty is starring stars as Betty Sue, boldly showing off the lingerie brand’s latest offerings while taking inspiration from female protagonists from late 20th century films. Agent Provocateur’s Creative Director, Sarah Shotton, explains the Kirsty appeal, saying, “Kirsty became a top model in the 1990s. She represents our perfect woman, a woman with a family that oozes unbelievable intelligence, sensuality, personality and confidence. She has a film noir, feline quality to her that I felt had a brilliant synergy with Agent Provocateur.”