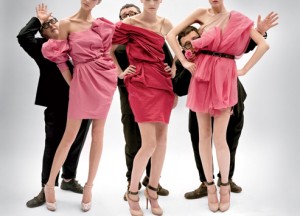 Swedish megabrand H&M is partnering with Lanvin‘s Alber Elbaz (My Queen!) for its next designer collaboration. Not 48 hours ago, everyone in Fashion Land were we participating in a highly produced guessing game after seeing videos of fabulous people with obscured faces and heavy accents talking about fashion. Turns out, those clips were just a carefully planned bout of misdirection. And to that, we can only say touché. And freak out. A lot. CHEAP LANVIN. CHEAP LANVIN!

Weirdly, last March, Elbaz told The New Yorker that a lower-priced line would ruin what he was trying to achieve at Lanvin. “I have a problem to do a collection that is a secondary line. I mean, you don’t want to be the stepsister. You want to be Cinderella. Show me one girl who wants to be the stepsister.” Guess he is now a recessionista.