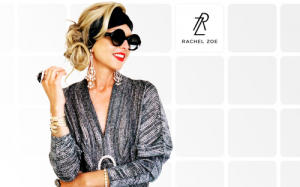 This season of Gossip Girl is going to be especially chic. There were already reports circulating saying that fashion industry giants Karl Lagerfeld and Vogue editors Hamish Bowles and Lauren Santo Domingo would appear on the show, and now it looks like everyone’s favourite celebrity stylist Rachel Zoe is going to be on the show, too!

Somewhere in between all of the shows and parties she’s been invited to over New York Fashion Week, she found time to schlep to Queens to tape a few lines. The workaholic is starring as herself in an episode whose story line centers around plans for Blair Waldorf’s 20th birthday party, a source has said. Strangely, even though she is perfectly capable, she has also agreed to let the show’s wardrobe department dress her.

“Rachel plays herself in the scene and has a handful of lines to remember,” the insider said, adding that designer Cynthia Rowley and Elle magazine’s creative director, Joe Zee, will also make guests appearances in the same episode. Set your DVRS…twice.