“Every girl is expected to have caucasian blue eyes, full Spanish lips, a classic button nose, hairless Asian skin with a California tan, a Jamaican dance hall ass, long Swedish legs, small Japanese feet, the abs of a lesbian gym owner, the hips of a nine-year-old boy, the arms of Michelle Obama and doll tits. This is why everyone is struggling.”
– Tina Fey 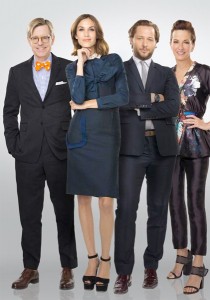 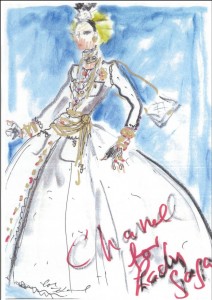 Last night, Lady Gaga cut the rope on “Gaga’s Workshop” at Barney’s New York. The lucky superstar even got Karl Lagerfeld to create a custom Chanel dress (and overall look) for the event.

What do we have here? White tweed with black trim, asymmetrical hemline, Chanel pearls, camelias and bows. Our beloved Stefani Germanotta paired the couture piece with black and gold studded platforms – as only she could do – and an intricate fascinator.

Want to see how the sketch came to life?
END_OF_DOCUMENT_TOKEN_TO_BE_REPLACED 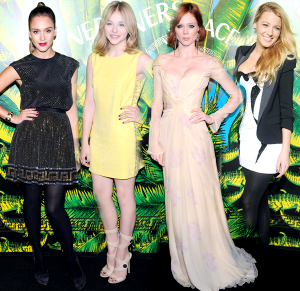 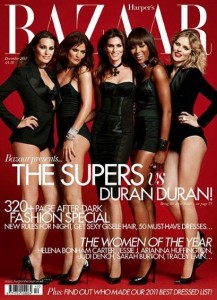 The Supers as Duran Duran

I KNOW! THE COVER EXCITES ME, TOO!

Caps over. Still excited. For yers, there was no expectation in my mind – whatsoever – that Naomi Campbell, Eva Herzigova, Cindy Crawford, Helena Christensen and Yasmin Le Bon would ever end up in a photoshoot together. Amazingly, years past the ‘supermodel era’, Harper’s Bazaar UK have them on the cover!

The nineties legends are posing to promote the upcoming debut of Duran Duran‘s music video for “Girl Panic” in which the five supermodels have been cast as the actual band (not such a stretch, as Yasmin is married to Duran Duran frontman Simon Le Bon).

Girl Panic‘s director, Jonas Akerlund (best recognised for his direction in Lady Gaga’s videos for Paparazzi and Telephone), also shot the spread, hinting that the whole enchilada is going to be exceptionally fashion-packed.