Why I Love Mad Men 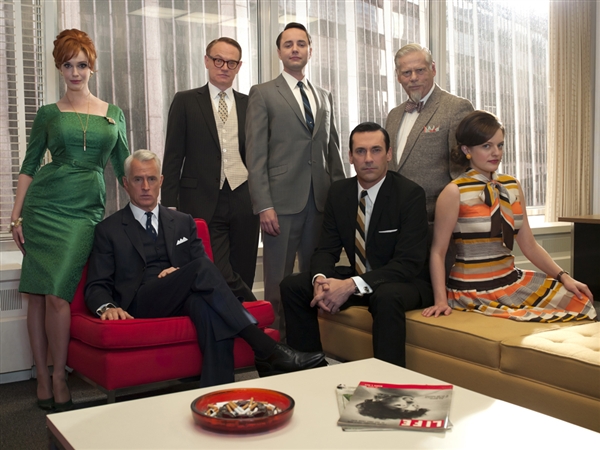 If you have ever met me, it is likely that you saw this post coming.

For those of you fortunate enough to not have to deal with my daily caffeine crashes, impressively high-pitched giggles, and incessant need to think of a song that matches every moment of my life, let me let you into a Lela fact: I am obsessed with Mad Men.

Leading up to Season Five‘s big premiere (tonight! tonight!), I have been turning into something of a Manic Pixie whenever someone mentions The Sixties, Jon Hamm, advertising…even gin. Like a one-woman Mad Men street team, I have even become that woman. The one that throws her hands to her mouth in shock – mid Mad Man love gush – upon hearing the words “I’ve never watched it?”. I’ve expected more people to punch me.

This show is like no other. Sure, you can get your period style fix from Downton Abbey – you can even get your chauvinistic sexual tension from True Blood…but you can’t get Mad Men. The closest example I can offer for those who haven’t seen Mad Men (START NOW), is The Wire. Similar to the Baltimore-focused humanistic empathy for citizens who have been let down by governments and institutions, Mad Men is about an increasingly intimate look at life. At the pursuit of happiness. At human behaviour without dramatic agenda or analyzed impulses. The characters exist in a collision of problems, political upheaval, social inequalities, and offer no explanation for their actions. No narrative. Each episode is a stream of question marks, as are our own lives.

At the core of the series we follow Don Draper and Peggy Olson, the quasi-protagonists. By ‘rights’, neither of them should be working as a creative in an ad agency; Don is bumpkin-bred and living under a completely fictionalized identity, while Peggy is not college educated and a working class (pause for effect) woman. Two individuals that, by opportunity and circumstance, have been given the chance to demonstrate their natural greatness. All while their lives get entangled in the world’s unavoidable ebb and flow.

As a technically-perfect television show, Mad Men hits every mark. It is a visual and intellectual treat, with a humour and heart that extends far beyond my used DVD expectations.