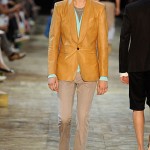 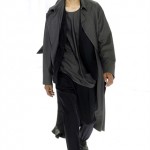 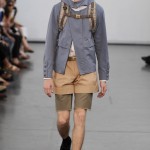 Lyrics have never told us that diamonds were a man’s best friend, or had anything particularly interesting to say about the way he looks tonight. Commercial fashion does not offer much diversity or selection for males and regularly sticks to traditional gender roles. Stores that are typically more edgy and high-end tend to attempt to break gender roles and allow for creativity in one’s appearance, but very rarely. We only see these types of risks taken under designers like Alexander McQueen, and they are still few and far between.

“Fashionable” is a loaded description for a man; a difficult atribute to compare within the sexes mainly due to the fact that men’s fashion is so limited. In the office, a man could wear a suit for one year and simply vary the button-up shirts he wears – tada, he’s safe while his female counterpart is expected to wear a new outfit everyday.

Men also try to stick to the norm for fear of being stoned (depending on where they are). In New York City, Los Angeles, London, Paris, and a few other select cities it is expected to do your thing regardless of perception, where as the rest of the world remains far more judgmental. Fashion conscious men are generally only respected under the term of a ‘metrosexual’, as there is a raging taboo combining sexuality and homosexual culture with fashion which many straight males seem to find threatening. It is a very definitive stereotype.
In our current society, the trends of fashion versus the role of men have no particular pattern or direction. As times have progressed and women have gained rights and responsibilities on par and above those of their spouses and male relatives, it seems there has been a definite shift. The options simply presented for women include jewelry, cosmetics, many different types of footwear, physical attributes to accentuate (or hide) as a canvas, hosiery, multiple undergarments, among the hundreds of different styles of basic apparel, and they outnumber the ‘styles’ that men can indulge in tremendously. Whether a female has decided to embrace her bohemian love child or her inner-Jenny from the Block, fashion has everything to do with the actual event of presenting their self as an aesthetic version of their innermost feelings or attitude. It is much more than a t-shirt and jeans.Women have, throughout history, been able to empower their garments and themselves with a high level of sex, while men have traditionally stayed neutral.

Trends themselves – as far as our male friends are concerned – typically vary from slick tailoring to ‘tailoring with an edge’. Even the so-called icons or rebels in our current seem to be applauded for their interesting use of ties (Jon Snow, Channel 4 Presenter) or skinny scarves (Liam Gallagher) – which shows us single-handedly just how little there is to work or experiment with. With such little variety, it makes you wonder if there truly is a precedent that is continuing to limit men’s fashion. For an answer, it would serve us well to look at the fashion sensations of the late Michael Jackson (as of one year and one day ago). With the sequins, rhinestones, lame’, and incredible weight and structure of his wardrobe, one word comes to mind: costume.

Fashion, for men, seems to be just that if any true risks are taken, therefore making it increasingly difficult to be – as simple as it sounds – fashionable.