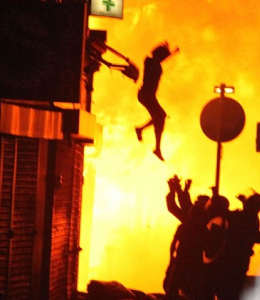 A Letter To The Participants of the London Riots

Your city is burning around you, and whether you literally lit the flame or not, it’s been instigated under your initiative.

You have to stop.

I know you’re angry. Most of us are. With little to no stake in the system, a huge percentage of people – like you and I – are cut off from social and economic rewards that are frequently flaunted in front of us. A small percentage of us can afford the ‘latest and greatest’.

It sucks, but it is no excuse for what you are doing. Those rewards are not a birthright, but gained through work and education.

“I heard two girls arguing about which store to steal from next. ‘Let’s go Boots?’ ‘No, Body Shop.’ ‘Hit Body Shop after it’s dead [meaning empty].'” The girl came out of Boots “nonchalantly, as if she’d done her weekly shop at 4:30am”, he added. He described others, holding up clothes to themselves in the broken windows of H&M. “They were just so blasé about what they were doing.”
– “Tiel”, North London

There is no way to rationalize your actions. The killing of Mark Duggan, unfortunate circumstances of low finances, the ‘race card’ – they are all lazy sparks to exploit an existing fury. It is you who has turned it into a bonfire, and it is you who has to extinguish it.

You’re burning down our home. Those stores you loot for thousands of pounds? Those independent retailers who have their livelihood’s torched under your command? The women you are kicking off their bicycles or mugging with machetes? They are people. Born with the same genetic code as you. They are mothers, uncles, brothers, grandparents…people who are working for their living and hold no responsibility over the source of your anger.

There are men and women in the armed forces risking their lives to protect your country every day. To be a domestic terrorist is a slap in their face. It is a slap in the face of everyone who has ever fought for the United Kingdom’s civil rights.

You are the future of this country. You can empower yourself, your friends and your family to make a peaceful change. That pair of trainers will mean one of two things to you in six months time:
a) A criminal arrest.
b) Nothing.

What will mean something real? The home you’re so inspired to tear down.