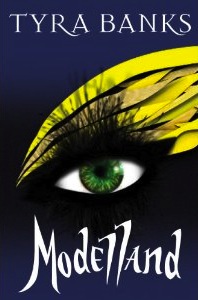 America is going to lose it’s mind over this. The Wicked-looking cover above is actually Modelland, Tyra Banks‘ new fantasy trilogy that has been loosely based on her life.

The first part of the novel introduces us to the protagonist, Tookie De La Creme (ahem Tyra ahem), who manages to overcome her gangly limbs, big forehead and unruly hair (poor child!) and get an invitation to the “most exclusive school in the entire world, the school that creates the most amazing supermodels…called Intoxibellas“. In fact, Tyra showed up on Good Morning America to further illustrate this point by wearing a ‘smize‘. While Tyra coined ‘smize’ on America’s Next Top Model to define smiling with your eyes, she traded it for Modelland and turned it into a sparkling, gold feather-shaped eye mask.

She explained to host Robin Roberts:

“What’s up with my eye?! OK, so at Modelland, this fantasy world that I’ve created for my novel, if you find one of these, which I call a ‘smize,’ it increases your chances of getting into the most exclusive school in the entire world, the school that creates the most amazing supermodels called Intoxibellas. It increases your chances by 91 percent.”

To quote the official synopsis:

Only seven extraordinary young women become Intoxibellas each year. Famous. Worshipped. Magical. What happens to those who don’t make it? Well, no one really speaks of that. Some things are better left unsaid.

Thrown into a world where she doesn’t seem to belong, Tookie glimpses a future that could be hers—if she survives the beastly Catwalk Corridor and terrifying Thigh-High Boot Camp. Or could it? Dark rumors like silken threads swirl around the question of why Tookie and her new friends were selected . . . and the shadows around Modelland hide sinister secrets.