Well hello, friend! Been quite a while. I know, I know – that’s an understatement – but I had the most all-consuming craving to blog this morning.

I could say it came out of nowhere, but I won’t pretend. After more than a year of silence, you deserve more.

So, here I am today: former full-time blogger and so-called ‘influencer’, tip-toeing back to write for the lolz – something I haven’t done since my work at The Telegraph and Forbes filled my schedule…and quite some time beforehand.

You see, around two or three years ago, I reached breaking point. I was tired of traveling with peers who cared more about sharing holiday selfies than being present in (and for) the places they were paid to visit (or people they met). Tired of seeing industries thrive by fostering fakery. Tired of the commercialization of life. My life.

When I started this blog (a whole decade ago), all I wanted to do was write. I got extremely and abnormally lucky along the way, eventually earning enough to make a living through it, but that core impulse never changed. Even if I did.

When I decided to take a break and get my NCTJ, I wanted to leave it all behind. To swap a life telling personal stories for a life telling everyone else’s.

But I didn’t have to swap it, did I? Because life was still going to happen, whether I wrote about it or not.

Life and death happened, but still, nothing. No diarizing, no creating, no inspiring. At least not for the hell of it.

That’s going to change today because I miss it, and I’ve missed it for quite some time.

I can’t promise much more than therapeutic ramblings today, considering we’re all locked down, but the simple notion that I’ve re-opened a space to share the best of food, travel, culture and life feels good enough for now. 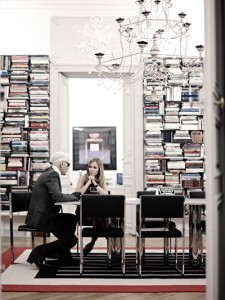 I am, without a doubt, of a million fashion-obsessed dreamers who would hyperventilate to find themselves in Karl Lagerfeld‘s Parisian (Saint Germain, to be specific) studio. This is why I am living vicariously through photographer Piotr Stoklosa and journalist Joanna Przetakiewicz, regarding their articulated, inspiring tour for VIVA! magazine. The dream does not stop here. Just look, the architecture itself is an inanimate muse. END_OF_DOCUMENT_TOKEN_TO_BE_REPLACED