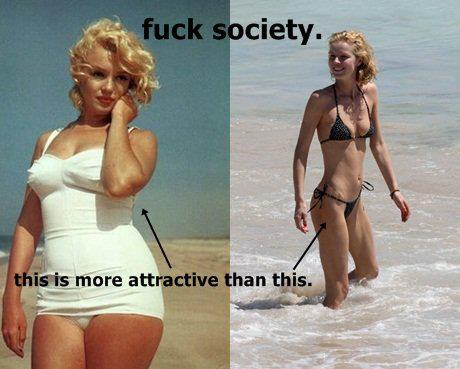 I’m not looking for an “A MEN!” here. The photo above – and the million similar photos that perpetuate themselves around the internet – infuriates me.

When did we all start hating on skinny people? A few years ago, I remember a male friend of mine and I discussing his “love possibilities” in a group of our friends. Upon reaching a very gorgeous mutual friend’s name, I was immediately rebuffed with a snort and “No way! She looks anorexic!”

I was stunned. The girl in question was sweet, caring, hilarious, beautiful, and ate almost everything in sight. Yet, because she is naturally very thin, she gets an immediate connection with a mental disorder.

To make the situation worse, everyone in the group – men and women alike – nodded and yeah-ed without hesitation.

Then it hit me. Though a man will get a Jersey Shore-worthy shitfit if he calls a woman fat, it is not the same if anyone calls a woman too thin, anorexic/bullimic, or comments on her lack of curves. Presumably, this anti-thin backlash is down to the unachievable and ever-Photoshopped media image of ‘perfection’; always altered to a shape that is thinner and more ‘hourglass’ than is naturally caught on camera. (Yes, even on Victoria’s Secret models.) But it doesn’t make it right.

Outwardly stating that girls with “junk in the trunk” are hotter than those without? It may not trigger anorexia, but it can surely trigger someone who suffers with low self-esteem or body dysmorphia.

Chrissy Teigan, Izabel Goulart, Crystal Renn and Nina Agdal got down and dirty in Las Vegas yesterday afternoon. The four models featured in this year’s Sports Illustrated Swimsuit Issue kneeled down to sink their pretty little hands into the cement outside of Planet Hollywood, joining other celebrities like Bruce Willis and Holly Madison who have left behind their prints on the Walk of Fame.

“We’re not strong enough!” shouted Teigan who was having a hard time getting the cement to indent. The ladies used a stick to sign their names into the cement blocks before mingling with fans that showed up on the Las Vegas strip.

Newly engaged Teigan talked about how proud she is to be apart of this year’s issue because of the beautiful photos. “Our audience wants to see curves,” she said. “No one wants be rail thin. That’s not sexy to me or anybody else.”

So, here we have models (that 0.0000002% of people in the world who are “perfect” enough to be Photoshopped) even saying thin is bad? How are the women with naturally thin bodies, flat chests, bums, and straight waists supposed to interpret this message?

I’m (not) sorry, but when the same magazines who are praising Adele for sticking up to Karl Lagerfeld are also attacking those ‘possibly pregnant’ or ‘eating their feelings’ celebrities on the next pages, I find the message to be seriously mixed.

When is the world going to be ready to support and promote healthy bodies? The bodies that come in all shapes and sizes?