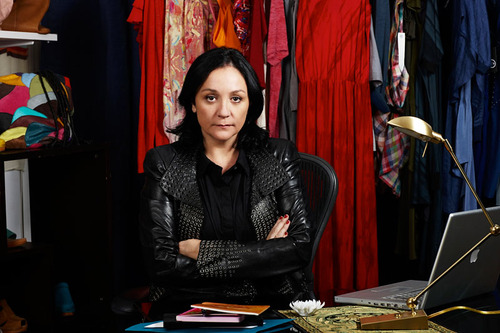 Kelly Cutrone is a PR maven and personal icon. She is the HBIC of People’s Revolution and semi-star of MTV’s The City, where her ‘character’ is the Fairy Godmother to designer Whitney Port. You can hate reality tv and love Kelly. She’s a quote-a-minute.

The best thing to do is to always compete with yourself and not to compete with others. The only thing you can control is your own performance and what you’re doing to yourself and with yourself. You also have to be careful about how you handle it, because you never know. That one cunt-y person could become the new Editor-In-Chief. Sometimes the nasty person wins. That’s why it’s always good to compete against yourself.

Sometimes it’s also a sign or foreshadowing of the fact that you’re not going to get what you want. You could be jealous of a girl who’s not as pretty as you, but you just have that feeling that she’s going to take your dude, and you might be right. Or you might be jealous of somebody who’s not as good at their job as you, but you have this feeling that she’s got that something extra that’s going to help her move ahead. Whatever it is, you might have that weird feeling, and you might be right.

I think I said, “Whatever you do, don’t ever put anything in writing and never say anything when anyone’s around.” I know there are kids in America who are writing these things down, because they write to me and are like, “Wow, that was amazing! I never really thought of that.” My grandma used to tell me, “Success is the best revenge.”

On the art of discernment:

On being versatile in the job market:

We all watched half of our friends lose their jobs. I mean, I’ve been watching this go on. I watched all my friends in recording studios and record labels lose their jobs. I watched a huge part of the fashion industry and the publishing world topple. I think it’s going to be a great thing ultimately, but adaptability is a big factor now, and never letting the ego get in the way. Basically, we had to let go of everything we believed in and were taught, because we were taught about exclusivity, and we were taught about not letting anyone in, and only selling to eight stores and only talking to six magazines. Well guess what? That’s over, bye!

On the horrors of men’s fashion:

I am happy for Lindsay Lohan that’s she’s going to jail. I think she’s going to get sober. I know her. I really actually care for her. I think she’s a really really sweet, super-talented young girl. I think that she needs to have a timeout. And you know what? So do we all. We all need a timeout. Some of us need a timeout for a weekend, she just needs rest, and she needs to be in a healthy environment…. I don’t really know about jail, so I would like to retract that by saying I’m not happy for her that she’s in jail, but I’m happy that somebody’s going to try to help her get some help.

On who to seek advice from:

… myself is a really good place to go to, because I usually know exactly what’s going on. I think we all always know what’s really going on with ourselves and we just don’t ever want to listen. Usually I take a little walk around with myself until I’m willing to actually do the work.

MTV changed my life—and I wrote about that in my book—all of a sudden, you could see style, you could see videos. And MTV, the first video ever played was “Video Killed the Radio Star,” and it did, because if you were ugly, and you were fat, and you were old, you were done, dude. You better get your steez on.