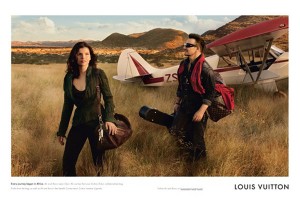 Instead of Louis Vuitton, U2 front man Bono and his wife Ali Hewson appear in their own ethical clothing line, “Edun“, in the new “Core Values” ad campaign for Louis Vuitton. Featuring the duo arriving in an African grassland, the ad states that “Every journey begins in Africa,” and is meant to give the small brand, whom LVMH took a 49 percent stake in last year, some international exposure.

The ad coincides with the Africa Rising exhibition where contemporary African art will temporarily be sold alongside Edun’s spring collection during Paris Fashion Week. Both Bono and Hewson donated their appearance fees to a slew of organizations that promote growth in developing countries, and portions of the profit from their new co-designed bag will also be donated.