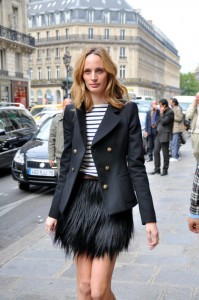 Lauren Santo Domingo has partnered with Aslaug Magnusdottir (who hails from the old Gilt Group) on a new online venture to be launched this February during New York Fashion Week. Going by the name ‘Moda Operandi‘, their own M.O. is to delve into the untapped world of virtual trunk shows. For those who don’t know – in physical trunk shows, the ‘whos whos’ go to exclusive events to chat to designers and order pieces directly from them before all the ‘normal people’ see them in stores (I say that very lightly).

The difference by making it virtual is that Moda Operandi will have the clothes available for purchase within 48 hours of their runway shows which can then be secured for a 50% deposit and delivered in roughly four months. Of course, there will be a great return policy. Designers who have agreed to participate include Thakoon, Proenza Schouler, Prabal Gurung, Narciso Rodriguez, Vera Wang, Alexander Wang, and Giambattista Valli.

As exciting as this is, it could also be the death of sample sales.