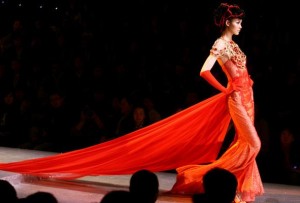 Is there new fashion competition for New York, London, Milan and Paris? Maybe so, from the recent sartoriality (…if it’s a word) of Beijing and the rest of China. US Vogue was the first to latch on, acknowledging the influx and import of Asian top models last month in a spread called “Asia Major”. HBIC Anna Wintour also recently announced that Vogue will set up a Fashion Fund in China.

Prada is next on the bandwagon as they have just announced that they will stage a show of their spring collection – along with specially created pieces – in Beijing on January 22. The powerhouse designer label is also rumored to be considering a listing on the Hong Kong Stock exchange. Three years ago, premonition pals Karl Lagerfeld and Fendi staged a show on the Great Wall…get ready for an Asian Boom, fashionistas.