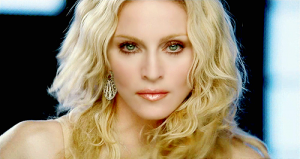 Gina Lapina, Lindsey Wixson, Siri Tollerød, and Daphne Groeneveld were signed to shoot the Fall/Winter campaign with legendary fashion photography team Mert Atlas and Marcus Pigott. Randomly, as the pair were in the process of filming a behind-the-scenes video of the photoshoot, Madonna strolled in an volunteered to film the video herself.

“We were supposed to shoot a video, so Madonna said she wanted to direct it”, Lapina remembers, saying the photographers told Madge that “she could do it but they weren’t going to pay her and she started laughing. She put on her iPod and taught us moves and we shot the video for two hours.”