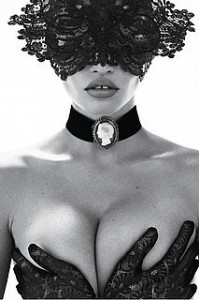 Vogue Paris celebrates it’s 90th anniversary this month with a special issue to be released on September 27th containing 624 pages of surprises. On the cover, Lara Stone wears only a lace mask, gloves and choker to illustrate the masquerade theme of the issue.

In addition, Vogue Paris will launch its first iPad app which will include a mini animation film directed by Steven Klein, a video clip shot by Inez van Lamsweerde and Vinoodh Matadin, and a ‘Making Of’ beauty session with Mario Sorrenti. As a bonus, Carine Roitfeld even comments the photographs of the portfolio on the iPad. Exciting!