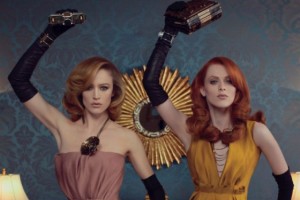 Though I wasn’t blown away by Lanvin‘s Fall/Winter 2011 campaign images (featuring Karen Elson and Raquel Zimmermann ‘dancing’), I was definitely intrigued. Dancing campaigns are usually chosen to show us the movement and texture in the garments, where the Lanvin shots were almost frozen stiff.

Then came the Steven Meisel-shot campaign video. It is the missing puzzle piece, thank the Fashion Gods. In the short-ish clip, we see Raquel, Karen, and two male models doing some poker-faced choreography to Pitbull’s “I Know You Want Me“. Never did I think I would see the day Lanvin would embrace Pitbull. It is delightfully tongue-in-chic, and expertly wrapped up with a little boogie from Lanvin designer Alber Elbaz. Tres cute.