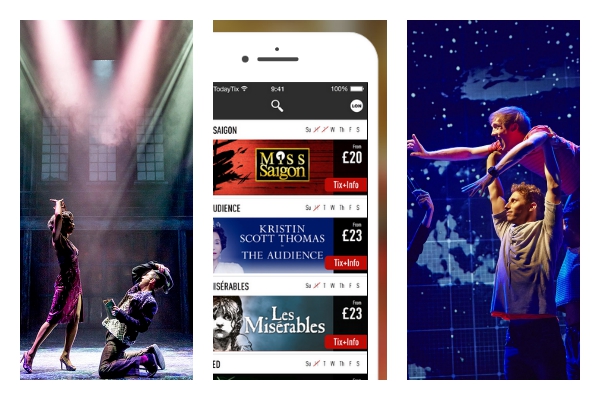 You may not identify as ‘West End Person’ just yet but I have the creme de la creme of musicals, plays, and apps that are going to work their hardest to convert you.

Memphis The Musical
I was so very charmed by Memphis. Though the US and Tony award-winning musical only hit London’s Shaftesbury Theatre last year, I had completely missed out on the ‘hype’ (if there every was one) and booked my tickets out of hopeful curiosity.

The story – hopeless white boy falls in love with talented black singer in the burning heart of Segregation-era America – ran the danger of being insensitive or sensationalist, especially with a relatively young British cast trying to bring 1950s Tennessee to the West End.

Memphis’ success is almost entirely thanks to soul queen Beverley Knight as sheltered-but-strong Felicia. Every time she opened her mouth the audience visibly sat up straighter. Her voice is quite literally perfection; it resonates with all the warmth and power required to tell a story so tightly wound in injustice.

Memphis The Musical was beautiful, entertaining, and has now recently employed super-crooner Matt Cardle as the male lead. I doubt you’d want to miss out.

Curious Incident of The Dog in the Night-Time
Over ten years ago, I remember browsing my favourite Borders (RIP) in Indianapolis and stumbling on an orange-coloured book with an upside-down dog on the cover. I devoured said book in less than a week and pushed in to the back of my mind for the following nine years and 50-ish weeks.

The book was turned into a play. I recently saw said play. And now I must ask you to do the same.

The Curious Incident of the Dog in the Night-Time found its West End home after being adapted for stage by Simon Stephens in 2012 and winning seven Olivier awards shortly thereafter. The story – a remarkably difficult transition from page to stage – follows fifteen-year-old Christopher through a few Holmes-esque pursuits after he discovered a neighbour’s pooch stabbed with a garden fork.

Christopher’s charm in inherent from the start of his first-person narrative. The teen has a profoundly unusual view of the world and an extraordinary brain yet finds himself especially ill-equipped to interpret everyday life. The results – assisted by the beautiful integrity of Marianne Elliott’s staging – create the most stunning, heartfelt, and honest story I’ve been audience to in years.

TodayTix
I find the traditional booking process for West End shows has never really suited last-minute availability and has thus become one of the reasons it takes me so long to get to the shows I want to see.

Naturally, someone saw the hole in the marketplace and launched at app that makes last-minute theatre tickets relatively foolproof. TodayTix (currently available in New York City and London) is a free iOS/Android app that genuinely provides the the best prices on last-minute theatre tickets. You can book the tickets as early as a week ahead or as late as same-day and simply pick your tickets up at the theatre before your chosen show. I have just scored an incredible deal on Miss Saigon (which I have wanted to see for over ten years!) so expect this is only the beginning for ticket binges.

Posted in Lifestyle, London by Lela LondonTaggs: Curious Incident of The Dog in the Night-Timelondon blogmemphis the musicaltodaytixwest end