And a Meester Makes Three 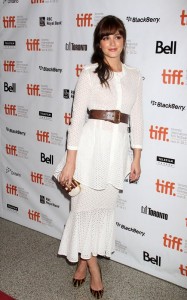 From Canada back down to the good old USA, there is a whole lot of great fashion being worn by our beloved Leighton Meester. Starting off at the 2011 Toronto Film Festival, she was out to promote her new movie – “The Oranges” in a gorgeous white, eyelet Alexander McQueen Resort 2012 dress. She used McQueen from head to toe with a gold-accented white box clutch as well as animal print pumps. To emphasise her waist, she also threw on a large leather belt. 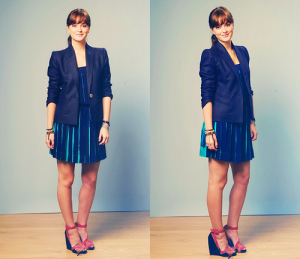 After that, lovely Leighton made her way to The Variety Studio at Holt Renfrew (again, at the Toronto Film Festival 2011). This time, she chose to wear an aquamarine and navy look from Resort 2012 by Louis Vuitton; in fact, it was the same look that Arizona Muse – my obsession – modeled for the collection. The pleated dress was layered underneath the black “Carlitta” jacket from Nonoo and plenty of colourful bracelets on both wrists. She then added a youthful flair with pair of pink and tan wedges from Pierre Hardy. 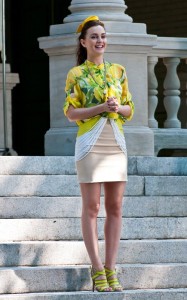 Lastly, Meester returned to New York to film new episodes as Blair Waldorf in Gossip Girl. In what is definitely the most extravagant look of the three, she wore a silk Moschino Cheap & Chic lemon-print blouse, a nude Spring/Summer 2011 skirt by Carlos Miele Spring/Summer 2011, and blouse-matching Loeffler Randall criss-cross Sandals.